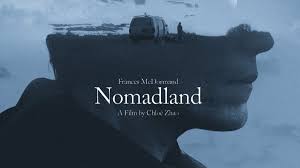 United States of America
Who

In the middle of an icy and gray landscape, Fern is a woman in her 60s, with no family, no home, no place. Her husband worked for a mining company in a small town in Nevada; when he died, she decided to stay there. With the economic crisis of 2008, the company closed, people left and the town disappeared. But Fern, she doesn't give up; now he lives and moves in a van, and is taking temporary jobs. The last one was in a large Amazon packaging warehouse.

A friend recommends to Fern that she meet a group of retirees who travel in caravans and live only with what is necessary and as temporary employees. A community of hikers, of pilgrims, who hold a periodic meeting in the Arizona desert. Fern goes there to meet them. So the film is linked to the documentary, because that community actually exists; its leader, Bob Wells, and real people also become protagonists in the film, especially Linda and Swankie. Thus the story and Fern's journey continue, and we with it, and fiction is woven together with reality. Nomadland : a land of nomads, of outcasts from the system, of survivors, of people who continue despite everything, because they believe in life even though the North American empire no longer believes in them.

A story on the road, in the van, of people who have lost almost everything, but move on; because what life brings is more important than reaching the goal, and encounters with each person are more valuable than things; and there is no fixed place, but that which exists in the heart. Fern's journey cannot be understood without that open and lonely landscape that embraces her with the cold, the stars, the fire, the desert, the mountains, the snow. And the memories she treasures: the old photos, the indelible image of her husband, the wedding ring, the dishes her father gave her, the song with Nat King Cole, the poem that the boy recites alone, the boundless horizon behind of his old house. "Home is not just a word or a place, but what you carry within you." Beyond physical uprooting, dignity and hope enliven life.

Actress Frances McDormand was presented with the book Nomadland by Jessica Bruder -in Spanish titled Nomad Country. Survivors of the XXI century -, to propose it to an almost unknown director. The young Chinese-born filmmaker, Chloé Zhao, studied in the UK and New York. He has filmed Songs My Brother Taught Me (2015) and The Rider (2017), with non-professional actors and actresses, casting Native Americans as the main characters; but these two works have not been distributed in Mexico. With Nomadland he achieves an intimate and contemplative film, in the same Terrence Malick Badlands. For both filmmakers, the human being is a tiny creation immensely worthy, in the middle of a universe without measure that covers it and of human beings who arrive as a gift. The film sustains its beauty with the strong presence of Frances McDorman, the precise photography of Joshua James Richard and the piano music of the Italian Ludovico Einaudi. The film has been awarded at all the festivals where it has been. 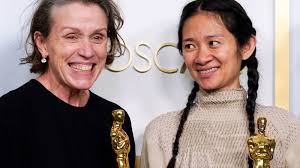 In an extraordinary event, in the 93 years of the Oscar, the award for best director of the best film goes to a young Asian woman. Upon receiving the award, Chloé dedicated it “To those who have the faith and courage to maintain goodness in themselves and the goodness of others, no matter how difficult it may be”.

Nomadland dares to put aside the prevailing values in today's consumerist, indifferent, anxious society, and takes as protagonists people that the system rejected. So, they choose a simple life, to see for others, to form a community of exchanges, not to run after some goal or a place, to stop and contemplate, to return to the heart, to seek the essentials of life. We are all walkers. There is no final goodbye, but rather a "I'll see you on the way", we have to meet one day. Life goes on, also in this year of pandemic and losses. We are alive because someone remembers us and someone we remember. Also those who have already left this world.