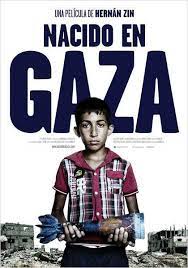 Synopsis: Documentary by Hernán Zin, an Argentine journalist, shot during the Israeli attack on the Gaza Strip between July and August 2014. The film follows ten Palestinian children who tell what their daily life is like amid the bombs and how they fight to overcome the horror of war and give a touch of normality to their lives. They are the spokesmen for the 507 children killed and the more than 3,000 wounded left by the Israeli offensive.

Harsh reality that bothers, seen from a child perspective and related by them, who from birth are already in a world without reason, without horizon, where the fragility that life escapes you is the reality of every day and there is no escape.

Many justifications can be given for the confrontation, but there is no rationale to explain it. As the director says, "I wanted to show a deeper vision of the war, with the physical and psychological wounds, the loss of the friend, of the family, of your home; all this is a wound that stays inside ... I wanted to that the spectator got into the child, the victim. "

This is a documentary committed to the social and the human in an intimate way; It shows it starkly, without complexes, documented by the protagonists. Here the protagonists are not those who carry the weapons of extermination, but those who suffer the consequences. As always happens, those who wage war are surely in a safe place, making money from arms sales and perhaps what else. It is an invitation to reflection, to take a concrete position.

The documentary is well organized, the camera travels through different places, at times it becomes the protagonist to bring reality closer, taking into account that it is always harsher and more cruel. Clear photography allows us to collect that ugly paradoxical aesthetic of war but beautiful of the human, although at times bloody. The music provides, of course, the pauses and tension that the documentary needs.

The documentary was filmed in 2014 and today in 2021 we have returned to the death of human beings as a result of ideological, ethnic, dogmatic and prejudice causes, which prevent us from sitting in front of “your legitimate other”. Without that recognition, peace will be difficult to achieve, as Humberto Maturana said.

I wish to highlight the latter, because it may be that in many of our relational acts we are not recognizing others as our legitimate others, preventing us from being more human, dialoguing and conversing to avoid consequences, not like a war but division and disunity.